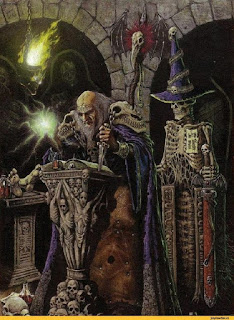 [A wizard did it]

In AD&D, you'd have to roll for 'System Shock' when resurrecting a character. I don't feel like I've lost a point of CON though...

This blog has been, if not dead, then very nearly dead for some time now. One measly post in 2018! And that was mostly to say you could watch me play rugby on live TV!

Obviously I haven't been playing much. And, until recently, not all that much had changed since that post way back in spring 2018. Well, I am playing now - and as a player no less! - in an online game of Scum and Villainy.

Playing in a game, rather than running a game, has allowed me to realise a few things. First is that any complaints that I might have about my players not learning the rules are a little hypocritical. I have the rulebook, I skim the pdf on my tablet, but without the responsibility for running the game looming on the horizon I have been able to get by thinking more about my character in the game world (Finn 'Vapour' Dyson, pilot of the Lazy Susan) than how the rules work. I wouldn't say that Scum and Villainy is a game that 'leans invisible', to borrow from S John Ross, but our GM Orlanth Rex has at the very least done the heavy lifting that allows me to concentrate my 'tactical play' on the decisions in the game world rather than on decisions in the game system.

I other words, I have been allowed o enjoy roleplaying without the responsibility to do anything other than 'play well'. But scratching an itch rarely gets rid of the itch - often you just need to scratch more- and it has led me to wanting to jump back into DMing, GMing, Refereeing, Directing, whatever term you might prefer. So I think I'll have to start my own online game (or games), with people who have the patience for an out-of-practice games master with a preference for games from the lighter end of the crunch spectrum.

So, consider me resurrected.