Continuing the quest for the Crown of Kings.

The party woke in the Forest of Snatta after a, shall we say, 'disturbed' night's sleep. Though they could hack through the forest in any direction that they wished, there were two trails leading into the woods. One, heading north, was wide and well worn, very possibly something trod by human/oid feet. The other, heading east, was narrow and less well defined, possibly a path used by some large animal. Or a pack of large animals?

The party headed east, the path narrowing as they went. Ho Lee was given the chance to make a Wood Lore roll, but failed. The party had hacked and stumbled their way into a STRANGLEWEED grove. Tendrils coiled round necks and pulled at swordarms. Mopsy, thinking outside the box, dropped to the floor and played dead. If murderous plants are capable of any feeling other than hunger, the Strangleweeds would have been surprised. But they can't, so they weren't, and more tendrils snaked around Mopsy. He wasn't a knight in shining armour, just a difficult to open tin of fertilizer.

The rest of the party hacked away, easily cutting through the bushes. The plants had picked on something a bit bigger and tougher than their usual prey. Even Mopsy, lying tangled and prone, was able to fight off the Strangleweeds. With a mighty heave (rolling a double six), he was able to pull one of the Strangleweeds almost clean out of the ground. The guerrilla gardening didn't last too long. Hack. Slash. Hack. And then Mopsy (rolling another critical) thrashed the last Strangleweed into lifelessness with one of its uprooted 'bedfellows' .

If STRANGLEWEEDS had been any real danger to the party - their low numbers and SKILL scores meant that the chance of the party being defeated was vanishingly small - I would have communicated some proper forewarning. Indeed, regardless of the degree of threat, it is always preferable that players have the possibility of making meaningful decisions. A Wood Lore roll tests character abilities. A description that suggests the possibility of danger ahead - the bones of small animals littering the trail - provides the foundation upon which a player can act.


The party pressed on along the narrow trail as it wound northwards and stumbled - literally - into another encounter. The trail - I had made clear that this path was not worn by human feet - was the hunting route of a pride of SNATTACATS. Lounging invisibly in the party's path, the Snattacats pounced! Well, not until Mopsy, chivalrous pointman of the party, had tumbled over one of them.

This was a much tougher fight; not only were there more Snattacats than party members, they also were invisible except for the round after they had been wounded. In other words, if the characters landed an early hit, the Snattacats could be cut down quite easily. But if not, that -2 to the characters' Attack Strength could prove incapacitating...

While Cramer and Mopsy drew blood early, rendering the Snattacats visible, Ho Lee was pushed back, fighting desperately for his life. The Snattacat mauling him terribly, Ho Lee needed the aid of his comrades, and a POTION OF STAMINA (along with a good sit down).

This would be the toughest fight remaining before the party reached the foothills of Zanzunu, largely because it victory rested on character skill and dice rolling, rather than resulting from player choice. As a result, with the benefit of the necessary information, the encounters with the remaining SEVEN SERPENTS might have felt a bit anti-climactic, requiring a simple routine of 'exploit weakness and defeat serpent'. Luckily, the relatively minor dice rolls left in play didn't allow everything to go their own way...

The party arrived at a well worn path that ran east-west. To the west, the path climbed uphill, and they could see that there was an earthen mound in a clearing at the top of the hill. Presuming it to be a barrow, the party decided to investigate.

The mound had a low door set in it, and appeared to be inhabited. Ho Lee was able to sense that the mound was protected with magical wards. With their previous encounters with the kind of eccentric magical NPCs that litter Titan in mind, the party very consciously decided to adopt a friendly, diplomatic tone; they knocked, waited, and were polite. And, as if by magic, the party were able to acquire nearly all the information required to defeat three of the remaining Serpents.

The mound was the home of Fenestra, an Elven Sorceress who had devoted her life to protecting the Forest of Snatta from the corruption that flowed from Mampang. The Water Serpent had killed her father, so she was only too keen to help them defeat the remaining Serpents. Indeed, she had the Sun Serpent trapped in a Crystal Ball. She told them that the Fire Serpent, which the birds had told her was somewhere to the south of her home, was vulnerable to sand, and that the Water Serpent, which haunted Lake Ilkala, could be stilled by oil. The Time Serpent was terrorizing the goblins of the Vischlami Swamp, and she had given them magic to help them defeat it. She gave them two flasks of oil, a whistle with which to call for the ferryman on Lake Ilkala, and then offered to sell them - sell them! - other supplies. I know Ayn Rand was a big influence on Steve Jackson, but this entrepreneurial spirit goes too far. Is there not room on Titan for a little generosity? Must selfishness be a virtue across all the Old World? 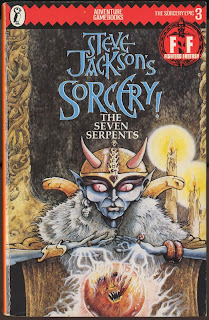 The FIRE SERPENT was dispatched with ease; the party kept their distance, avoiding the explosion as the small red snake with intelligent eyes transformed into a terrifying Serpent, fire coiling around its body. Terrifying, that is, if you don't have a few pouches full of sand. Sand cast, flames extinguished - you could almost feel sorry for the little, powerless snake as its head was crushed by Ho Lee. Three Serpents down (and one trapped by Fenestra).

The party made their way to Lake Ilkala and, using the whistle given to them by Fenestra, summoned the ferryman. Summoned is the right word - though he must be one of the least otherworldly denizens of the Faerie Kingdom - as he appeared to pop into existence just outside the field of anyone's vision. In this world, nothing is free and even heroes on a quest must pay the fare; more gold drained from the party's purses. Muttering and cursing under his breath, the old boatman paddled the party across the lake, where they were ambushed by the WATER SERPENT.

The lake began to boil, and out... flowed a shimmering blue Serpent. The party had to Test their Luck to remain in the boat, luckily they held on - just. Ho Lee barely kept his balance, but managed to pass the flasks of oil given to him by Fenestra to the others. The Water Serpent rose up like a wave, ready to crash down on the boat. Time for Tests of Skill... Cramer threw the unstoppered flask, but it flew off to one side, splashing ineffectively into the water. Mopsy held the party's only other flask of oil. Mopsy has a SKILL of 8. He rolled a... five and a... three. Phew, we're into Irkutsk! The oil splashes over the Water Serpent, which spreads across its roiling surface. The disturbance in reality that is the Serpent's physical form settles and calms until the surface of reality has been smoothed over. No more disturbance, no more Serpent. That's Five Serpents who won't be winging their way to Mampang.

The party pushed their way through the tall black reeds of the Vischlami Swamp, heading in the general direction of the foothills of Zanzunu. Soon they were trudging through knee deep mud - Ho Lee finally found a use for the vermin repelling spell given to him by Ghaza Moon, keeping the GIANT LEECHES from their warm, blood-filled flesh. In this foul smelling 'forest' the party came across a small group of GOBLINS. The party adopted a friendly demeanor, and a pantomime ensued.

The Goblins could barely speak the Common Tongue, and none of the party could speak Goblin, much less the particular dialect spoken in Vischlami. The party made it clear that they were there to kill giant snake things, but the Goblins wanted to know something.

They wanted to know if anyone in the party could read. Specifically, could anyone in the party read the magic scroll given to the Goblins by Fenestra to help them defeat the TIME SERPENT. After much back and forth, it was made clear to the Goblins that, yes, Ho Lee could read, and he would use the scroll to defeat the giant snake thing that was terrorising their tribe.

Scroll in hand, the party were, with little ceremony, ushered towards the feeding grounds of the Time Serpent. It was waiting for them; existing outside of time it was probably there yesterday and tomorrow. Is this an acceptable 'Quantum Ogre'? Ho Lee frantically began chanting the words written by Fenestra, which involved lines such as 'time's arrow striking the heart of evil'. Unfortunately, he needed to succeed at a Magic Lore test for the spell to work... The Serpent appeared to move jerkily, as if it were time itself was skipping, but the chant could not bind it. Mopsy suffered a wound, and then the Serpent struck at him. The monster was not bound by the laws of causality. Ho Lee continued to stumble over the words, unable to find the rhythm of the chant. Incredibly, by luck, skill, or divine favour, Mopsy managed to block one of the Time Serpent's attacks, but Cramer and Mopsy were both being rapidly worn down by the Serpent's strikes out of time.

Ho Lee found the archaic rhythmic structure of the chant and the Serpent suddenly found itself constrained by causality and unidirectional time. Easy meat for Mopsy and Cramer, but before they could finish the monster it did for itself. Rolling a double one, the Time Serpent... The Time Serpent reared up for one final strike at Mopsy. Clumsy, bound by the laws of reality that had never applied to it, it bit its own tail. Maddened by the order of the universe, it swallowed more and more until it disappeared from existence.

Six Serpents down, but the Moon Serpent unaccounted for. Let's see what story it had to tell the Archmage. On to Mampang!
Posted by Andy Bartlett at Friday, October 04, 2013