Okay, you've assigned points to SKILL, STAMINA, and LUCK (and MAGIC)[1]. You've assigned your Special Skill points and selected your Talent. If you are that way inclined you have selected your Spells or Miracles[2]. You've thought up a name, a description, and you've done the most boring bit of any character creation process - you've gone shopping. Your Advanced Fighting Fantasy 2e Hero has the expertise and equipment and is ready to

But wait. What's this? Social Status? 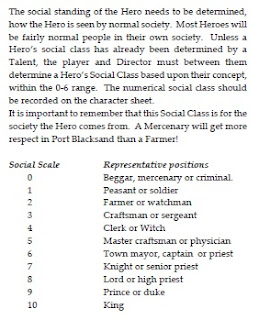 Heroes start with a Social Status of between 0-6 (chosen as per character concept), with 7 and 8 available to starting Heroes who take the appropriate Talents.

What's this for? Do the GOBLINS in the Forest of Doom care whether or not my Adventurer is a dirt farmer from Hick Town or the son of King Salamon himself? Well, actually, they just might. But yes, I'll concede, as far as the rules go, Social Status isn't of any great importance.  In fact, the only place I can find a mention of using it is on p51, in the Social Actions - Reactions[3] section, which reads:


"Social class should also be taken into account if the difference between the two parties is more than 3 or so. A beggar talking to a Lord may well get an unfavourable reaction, but a Lord talking to a beggar will be very different!"

So all a bit loose and freeform. And "3 or so" seems like a rather large gap to begin with; the difference in social rank between a 'senior priest' and a 'master craftsman' ought have some effect in most pseudo-Medieval settings, even if the difference in Social Status is only 2.

But it *could* be used by enterprising Directors to add an impression of depth to their campaigns. First, and most obviously, Social Status could be used as a modifier in social situations. So you're asking your Heroes to test their Leadership, their Etiquette, their Bargain, their Con[4] Special Skill? Surely all of these could be influenced by a PCs Social Status? I wouldn't recommend rolling against Social Status, unless you want failure to be the norm - and perhaps that's right, that leveraging your Social Status is something that can only be reliably done by people of the knightly classes and above. But as the rules suggest, the power of social rank to affect a situation is relative: a Sir Therfax can reliably browbeat a peasant, but a king can impress his will upon the Sir Therfax. It is also not simply one directional. Horgun the dockworker has a much better chance of making useful contacts in the Block & Tackle Inn than does Sir Therfax.

So the rules are right, difference in Social Status matters, and should be applied on a case-by-case basis to 'social' Special Skill tests. Sometimes the Heroes Social Status will be being measured against that of an NPC[5]. Sometimes the bar will be set by the setting - a Director can assign different 'Social Status' scores to different parts of a city (or even different parts of a Castle, a Palace, or a Temple). So a knightly hero (Social Status 7) might have +3 modifier when attempting to impress their will upon a the town clerk (Social Status 4). But such a character roleplayed as leaning on the little people might also might suffer a -4 modifier when attempting to make friends with a sergeant of the town watch. A few points on the dice can be a way to reinforce the colour of the setting. There is no reason why Social Status cannot be used to add more fun (yes, fun!) to the Hireling, Mass Combat, and Holdings rules in the Heroes Companion. It is up to the Players, through their choices, statements of intent, and description of their Heroes' actions[6] to determine quite how their Social Status would effect the game world, and for the Director to make a judgement.


[1] I've written before (and I'm not the first to say so), that AFF, being such a simple, robust system, is well suited to the addition of extra 'stats', or the replacement of the existing stats (usually MAGIC, but I could imagine replacing LUCK too). Stellar Adventures does this, adding TECH for Robot characters (which interestingly replaces LUCK) and PSIONICS for Space Monks and other Psychics (replacing MAGIC). Other examples from the solo gamebooks would be FEAR (House of Hell), HONOUR (Sword of the Samurai), WILLPOWER (Beneath Nightmare Castle), EVIL (Dead of Night), though I'm pretty sure that there's others scattered through the books. Add whatever is thematically appropriate for your setting and campaign. CORRUPTION? Go ahead. SANITY? Sure, and get all 1920s pulp hero investigating what needs be done by renaming SKILL 'COMPETENCE' and STAMINA 'GRIT' too.

[2] Actually, the magical abilities granted through worship of the gods of Titan are described as 'powers' in a section entitled 'Priestly Abilities', but I like 'Miracles' so that's what they are in my game!

[3] AFF2e has no set mechanism for 'Reactions'. I use something very like the 2d6 Reaction Roll of Classic D&D, adjusted by whether the NPC/Monster disposition is Friendly, Neutral, Unfriendly, or Hostile - the categories given to us in Out of the Pit. I tacked it onto the end of my Viscera! supplement.

[4] And why are there no Persuade or Orate Special Skills? Want your Hero to have one - write it in! There is, please note, a Silvertongued Talent which adds a whopping +3 (on a 2d6 curve, that's a LOT) to these kind of social skill tests.

[5] Note that I advise that Directors do not listen to the AFF2e rulebook here. Way back in 2015 I wrote:


"AFF is meant to be a simple game. The master merchant should have SKILL 4 STAMINA 5, which adequately represents him as a combatant, and on the same index card you scrawl 'PCs attempting to bargain with Marco Columbo suffer a -4 penalty to their effective SKILL'. Instead of opposed tests - which require NPCs to be statted out as if they were PCs - non-combat 'contests' are then conducted as unopposed tests based only on the PC's SKILL and Special Skills, plus or minus modifiers, with the capability of the NPC to frustrate the aims of the PC being expressed as a simple modifier. The NPCs are treated just like any other feature of the world of Titan that might affect the PC's chances of achieving their goals."

[6] i.e. Roleplaying, but so many take that to mean more speaking in a funny voice than making choices on behalf of your character. You don't have to put on a posh voice to have your adventuring prince bully the town guard, you just need to say that that is what he intends to do and describe how he will do so. And then we might roll the dice.
Posted by Andy Bartlett at Tuesday, July 30, 2019