I was inspired by this post on Monsters and Manuals to bash out some more justifications for my switch to a sandbox campaign for our irregular (new babies do that to you) game nights.

I have been mulling over a range of systems for a co-GM’d fantasy sandbox campaign we have planned. As I have written, I get the distinct feeling that the players in our group are hankering after a bit more of the ‘kill the monsters and take their stuff’ playstyle of D&D and a bit less of the ‘scrabble in the mud, survive, though mentally and physically injured, and go unrewarded’ playstyle of WFRP. This doesn’t mean that the system will be a class and level D&D-alike system. After playing around with A/D&Ds and their retroclones, BRP-derived games, and even small timers such as Dragon Warriors and Advanced Fighting Fantasy, it looks like we’ll be using WFRP (1e or 2e? we’re not sure). However, by letting the players choose their starting career, the range of skills and trappings should create an *adventuring* party capable of a bit of fighting and a little magic. Replacement characters, by contrast, will be rolled randomly the old school WFRP way – but as they will (barring a TPK) be coming into an experienced and better equipped party, these characters will have a better than normal chance of survival. And as WFRP isn’t a level-based system, replacement characters that start at ground level can be far more useful; they needn’t be mere torchbearers. More, the career system of WFRP is the perfect match for sandbox play; your character wants to be a sea captain, a merchant, an explorer, a knight, an outlaw chief? Well, do it, and the system will support that[*1]. All said, the aim is that the game will be much more in the image of the front cover of WFRP1e – grim and perilous dungeon delving – than that of a ‘classic’ WFRP game – in fact, we intend to borrow as much from that other great 1980s Brit-fantasy world, Titan, as we do from the Old World. More Blacksand, less Bogenhafen. 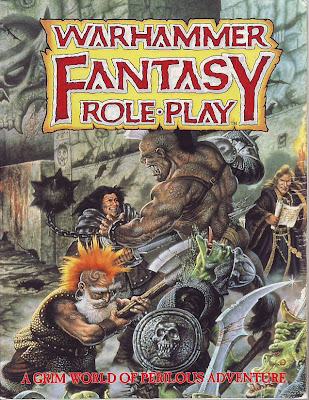 More of this, please.
Now, The Enemy Within starts with a great switch – what begins with a promise of D&D dungeon-delving for hordes of treasure quickly turns into a Call of Cthullhu scenario. But while that is a really nice idea, the players in our group struggled to rationalise just why budding treasure-seeking adventurers would be bothered about the mysterious goings on of a town that they had never before visited. Sure, they were pushed along by the events that force them to leave town rapidly, to travel a certain way up the river, and so on. D, my co-GM for the upcoming sandbox, used his character to rally the party with (frankly delusional) renewed hope of great rewards, even as the riches promised were snatched away from them. But it was all a little ‘forced’; NPCs turn up when needed by the plot, neither the chasing Watch nor the angry mob will catch the PCs unless they do something very stupid – it was all a little ‘forced’, on both my part, as the GM, and on the part of the players.

I should have let the party bog off into the woods, roll up some random encounters, fight goblins, discover an ancient barrow, and then, as they slowly bleed out, die of disease, or gibber insanely, they would have watched the town of Bogenhafen fall into a abyssal portal of Chaos fire.

I should have let… no, I didn’t stop them, but as we all knew we had to play our roles I didn’t have to. We played our roles in the story, not our roles in the game. So I made sure that Guild Master Johann Exposition pops up when needed, as written, and they make sure that, despite being a bunch of lightly armed, poorly experienced ne-er do wells, they maintain the motivation to investigate a possible daemonic cult even as the apparent odds against them mount. We wouldn’t want to ruin a great campaign by not following the trail set by the GM, would we?

Yes, we would. The best parts of the handful of sessions that played out Mistaken Identity and Shadows over Bogenhafen didn’t involve dealing with the cultists – for those bits, the PCs were pushed and pulled along until they got to the right spot for the plot. The best parts of those sessions were the player-driven bits: when the sneering Elf played by S decided to become an Agitator for Human-Elf understanding and had pamphlets printed (at the printers of the fake lawyers’ stationary that had lured them to Bogenhafen); when the illiterate farmhand played by C threw these in the face of anyone who obstructed the party, accusing them of racism; when the thug played by A knocked out the festival boxing champion, and was in turn knocked out by the C’s illiterate farmhand with a spectacularly lucky punch in the same tent the following evening.

This is all going to go wrong, I fear. But then I remember that it has only gone wrong if we don’t have fun…

[*1] And the career (and skill) system doesn’t support linear ‘plotted’ campaign play in quite the same way. The character actually has to take up the new career in order to advance – it is not an abstract levelling up. Sure, this can be done during ‘downtime’, but even that breaks a ‘plotted’ campaign. But if the campaign can respond to one of the players desires that their character becomes a sea captain, let them do it, and offer them the Isle of Dread, the Gold Coast of Lustria, and the Island of the Lizard King to explore. Player choices with regard to advancement shape the world as it is created in play, and by playing WFRP, even when you offer the players a way for their characters to get what they want, you are sure to leave in plenty of ways for that to end very badly.

Labels: Monsters and Manuals, sandbox, Shadows Over Bogenhafen, The Enemy Within, Titan, WFRP