Inspired by Ckutalik’s campaign map (and an adolescence soaked in fold-out Gazetteer maps), I began playing around with Hexographer, trying to knock together a first draft of a map suited to *gaming* rather than writing fiction or engaging in fantasy economics. Centred on a Port Blacksand-alike den of thieves, cutthroats, and sentient topiary, I placed a 20-mile band of settled farmland around the city before we got the adventuresome wilderlands; to the north, isolated, curiously-odd fishing villages (the Wicker Man / Innsmouth), before the land rises into moorland punctured by jagged teeth of slate, populated by hill tribes, Ogre shepherds, monastic hermits, as well as the odd Citadel of Chaos (and the ruins of previous megalomaniacs’ country retreats). To the west, mist shrouded woods, spider webs thick enough to entangle a strong man, spotted with villages full of superstitious yokels, who speak with frightened reverence about the Thin White Duke (Ravenloft / Mirkwood). To the south, beyond the Keep on the Borderlands, a broken land of limestone caves and white walled valleys, home to countless humanoid tribes and ways into the underdark. The streams and rivers that cut this monster-ridden land drain into the (Scorpion) swamp, which might well contain a Frog Man pyramid… 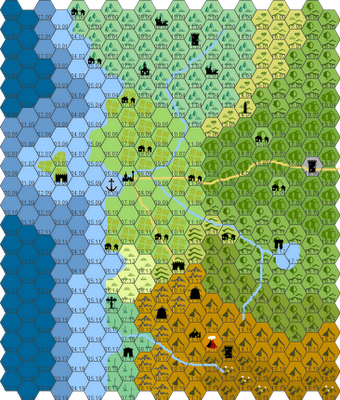 Wholly derivative, but then I’m not trying to be original, I’m trying to build a world in which the players can’t help but point their characters towards adventure. But then I read a post by noisms, which has the effect of pointing out that my map, using a nominal scale of 5/6 mile across a hex, might well be at a hopelessly large scale – at least to be used as an adventureful hexcrawler in a world of foot travel over moors and through woods. And then, to rub it in, I find this article, at the Hydra’s Grotto, which points out that the whole of Skyrim would fit inside a single hex at this scale!
Posted by Andy Bartlett at Friday, March 30, 2012