Dredd – A Two Line Review (and a bit more)

Dredd is an excellent, lean, visceral action film. Dredd is not a good Judge Dredd movie.

First, they did, kind of follow through with the reference to ‘We’re Going on a Bear Hunt’. In the trailer, Dredd says; ‘We can’t go over them. We can’t go under them.’ These lines are cut from the final film, but Dredd does say; ‘We’ve got to go through them.

I HATE 3D films, the 3D effects break, rather than build, my immersion in the film – they often feel more like a simulator ride (or one of the 360° cinemas that they used to have a theme parks) than a movie. And they leave me with a headache. That said, 2D films do that to me too – the first Transformers movie was a baffling whirl of visuals and ear-bleeding noise, so I’m obviously not built for contemporary action films. In Dredd though, the 3D effects work. In fact, they’re integral, being used mainly to visualise the effects of Cake, a made up drug, as it stimulates Shatner’s Bassoon. In the film the drug is called Slo-Mo, and there’s no sign of Czech Neck, but its neurological effects appear the same.

But Dredd isn’t a good Judge Dredd film. It is a very violent sci-fi film. And here is the beginning of the problem; Dredd (and Anderson) mete out summary executions left, right, and centre. Now, I have let my 2000AD subscription lapse in the last few years, but the lasting impression of the wardrobe full of progs and Megazines is that Dredd doesn’t summarily execute people except in extreme circumstances. That the Judges are hyper-violent BUT sentence people to the Iso-Cubes was always a big part of the distinctiveness of Judge Dredd and Mega-City One, for me.
And Mega-City One certainly looks like a realistic mega-city of the near-ish future. But it doesn’t look anything like Mega-City One. It has no character – and in Judge Dredd, don’t be mistaken, it is the city which is the lead character, not the faceless Dredd. Mega-City One is the trends of the 20th Century taken to fantastical extremes, not just the degradation of the favelas and banlieues, but the absurdities of pop-culture too. 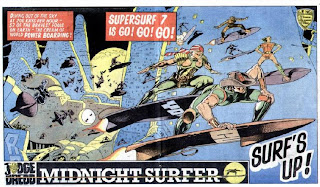 See that city? That's Mega-City One that is.

I have been talking about Dredd as being like a new Verhoeven film, but it isn’t. It’s got the violence. It is set in future. But the satire is absent, and as a Dredd fan, or a Verhoeven fan, all through the film the question, ‘where is the satire’ keeps bouncing back to the front of your mind. And without the satire, Dredd becomes a much more reactionary concept (especially when there’s summary execution in the bargain); here is your future, and drokk, you better hope we have fascism to contain it. Which might not be that far away in some parts of the Mediterranean Free State.

There is a belly wheel, there is a Hottie House, and there is a poster advertising a ‘The Mark of Krysler’, but these barely perceptible nods only heighten the non-Dreddness of Dredd. It’s a shame when you add it all; Dredd, and 2000AD, played a big part in forming my taste in fantastical fiction, and therefore my tastes in fantasy gaming. I’m struggling to imagine the Mega-City One of Dredd being a city of a Boing(TM) craze, or Otto Sump or Max Normal, one of Judge Cal and the Kleggs, or even one invaded by Judge Death. They’ve made a very good film that is a worse Dredd film than Stallone’s effort. I could imagine a late 1990s Stallone Dredd sequel featuring all of those things. If Dredd makes enough money to warrant a sequel, stripped of licence for visual inventiveness granted by Slow-Mo, I wonder where they can go.