In the world of Hammerstein! (and in what I’m calling My-Stara, the heavily modified version of Mystara that our group is currently exploring), Humans are the oldest sentient race. They were created by the by the trickster god Humaman. They were made in the in image of the Gods, and they shared their passions and vices, though on a mortal scale. At first, the Gods were amused, and congratulated Humaman. They walked amongst the humans and played with them, damaged them, and disposed of them as a spoiled child does with his toys.

But Humaman’s joke wasn’t intended to offer the Gods amusements to idle away the eons. It was a vicious satire that built to a terrible punchline. While the Gods played at being Emperors and basked in worship, Humans got on with making History. Without an eternity to while away, mortal Humans are creatures of action and progress. Ages passed, countless generations, but eventually Humans built a civilization that rivalled the power of the Gods – the First Empire of Humanity – that wielded great magic and constructed enormously powerful machines. Having mastered the world, the First Empire made war on Heaven.

The war destroyed the world spanning Human Empire, buried cities, rent great wounds in the landscape, and left magical residue that brought into being all manner of Men-Kinds; Beastmen, Goblins, etc. and the proliferation of monstrous creatures.

The war also damaged the Gods terribly, and they fled the world to their city on the Moon. But before they left, they created the Elves and the Dwarves. The twin gods of Time, Moment and Eternity, took the Man Rune, first carved by Humaman, and used it to create races that were meant to hold Humans forever in check.

The Gods were alarmed by the ability of Humanity to create History. Moment, created the Elves in order to distract Humanity. Moment set the Elves down on the back of a LEVIATHAN, upon which they built their homeland, ELVENBONE (in My-Stara these Melnibonean Elves replace Alphatia). Moment gave the Elves the impulse to explore every sensation that can be experienced in mortal life. Experiments in food, art, sex, drugs, and violence fill their lives, and the lives of the Humans that they live among, with anything and everything other than the drive of History. They are agents of CHAOS. 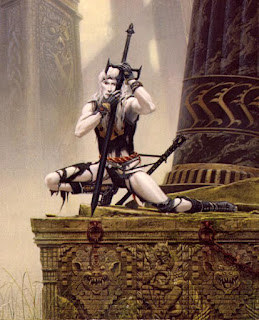 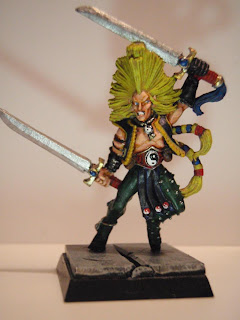 And this guy is an Elf too. My-stara's version of Alfheim will be a bit more... punk.

Eternity created the Dwarfs as a conservative check on Humanity. Eternity set the Dwarfs down within IRON MOUNTAIN, and gave them a complaining, suspicious character. The Dwarfs took the task of recording all of History within their great mountain vaults. Eternity ensured that the Dwarves would be a force for LAW. If there is one thing a Dwarf dislikes more than change, it is progress. If things must change, they should change slowly. That is the Truth every Dwarf is taught.

Unfortunately for the Gods, and for all the Men-Kinds of the world of Hammerstein!, some Dwarves became ever more extreme in their pursuit of Law, in ordering the world, while whole communities of Elves took to the worship of Chaos itself. The very essence of the world had been damaged during the war between Humans and Gods, and through these wounds crept the alien intelligences of primal Law and Chaos. Under the influence of an Angel of Law, the Human’s built a Second Empire of Humanity, a terrible continent spanning death cult, which only ended when the barbarian king, Hammerstein Heartbreaker, stormed the Ziggurat of Permanent Order and killed the demon, bringing into being the current era of free men and petty kingdoms.