Over Thursday and Friday night (which spanned three weeks of game time) the party explored the Mire Woods in search of Georghe Tincu, the son of a wealthy ice merchant. The boy had lived large parts of his life on the river, travelling on his father’s boats, and it was assumed that he had disappeared while exploring the river. Raglan Tincu has hired several parties of adventurers to scour the countryside.

One particularly lurid theory is Jenny Greenteeth, the monster of the Mire Woods, has taken the boy. The problem was that the locals couldn’t agree on just what Jenny Greenteeth was. A water serpent with a woman’s head, a beautiful but evil maiden covered in river weeds, a child-eating old crone…?

The (shorthanded) party, consisting of D’s Fighters Chip and Dale (!) and A’s Magic User Kitty, accompanied by Nalag, a Goblin porter, and Hengist, a Human man-at-arms (thanks to Meatshields!) followed a stagnant, slow moving stream known locally as the Vein into the Mire Woods. The Mire Woods are a thick tangle of trees, roots, and undergrowth, and so moving along the river avoided the risk of getting lost and moving exceptionally slowly, both of which would equal an increased possibility of a frightening night in wild and weird part of the world. 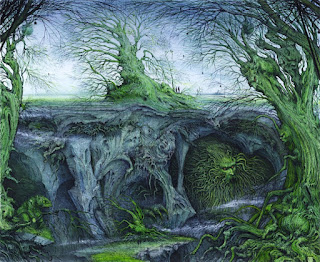 The party picked up the trail of someone with boy sized feet on the muddy bank, passed the opportunity to investigate the body of an adult, and were ambushed by a GIANT LEECH. A ‘small’ Giant Leech, which killed Nalag, reducing the already scrawny Goblin to a bag of a bones. So much for that ‘encumbrance sink’.

The party were less keen on travelling on the muddy bank of the Vein after that, slipping knee deep into the brown water with a regularity that was a little more sinister now that they had encountered one of the inhabitants hidden below. Not far up the stream, the woods thinned on both banks. A path on the right bank led away into the forest, illuminated by globes of light ‘hanging’ in the trees. On the left bank a path that might be little more than an animal trail led away from the river. The party were uneasy at the idea of walking down a path lit by balls of light, and so headed along the trail.

There they found Georghe’s exhausted, wounded older brother Vitali. Desperate to be a hero, he had set off at dawn in secret, but had run into a flock of ‘vampire birds’ (STIRGES). The party tended to the sobbing and desperately weak Vitali, rested, ate and watered, and decided to return the boy to the edge of the woods, where their boatman waited.

The party decided to venture back into the Mire Woods, keen to find Georghe. They enjoyed an unfathomable standoff with a wild Elf, mohawked and inscrutable, bow at the ready. He recommended that the party relax in among the flowers, before he disappeared into the woods. The party came across a marble birdbath, dedicated to Victoria Kalten (‘may this bring you their relief that she never found’), but decided not to disturb the crystal clear water in the basin.

Then, coming across a rise, they found a clearing carpeted with poppies. As they crossed the clearing, heading back towards the vein, A asked if Kitty noticed anything unusual about the flowers. Kitty bent down, heard a crunch underfoot, and noticed that under the flowers the clearing was covered in brittle fragments of bone. The party began to run… and kicked up the pollen as they did so. Chip (or was it Dale?) failed his Save vs Poison, as did Hengist the man-at-arms. Chip was overcome with the urge to simply lie down and watch the clouds. Chip wrestled Dale free of the clearing (or was it the other way around?), and as they passed the edge of the clearing the magical effect of the pollen changed dramatically, with the flowers disappearing and the murder hidden by the flowers visible in all its gore.

Nobody fancied going back in to save Hengist – he was just a meatshield, after all – so the last the party saw of him he was lying down, drinking from his wineskin, with various bits and bobs of the party’s equipment on his back. Including Dale’s (or was it Chip’s – seriously D, two characters with one class, one background, one personality, and not quite two names makes it hard to keep track) long bow. Make the hirelings carry the oversized equipment, sure…

Breath caught, and nerves calmed, the party found themselves back on the banks of the Vein. A brook of clear water joined the stream on the far bank. The party caught the briefest glimpse of a pair of beautiful, naked, green-skinned three foot tall women frolicking in the stream. They turned, smiled, and beckoned the party to follow them up the stream. A clear trap, but if the party wanted to get the boy back…

The party followed the green-skinned temptresses, who flitted in and out of their vision, up the stream, until they reached a large, shallow, roughly circular pond of still, clear water, sitting in a bowl of mud walls. At the centre of the pond was small ‘temple’, open on all sides with simple white columns holding up a roof, not much more than seven foot tall. At the centre of the temple was a ‘throne’, upon which sat Georghe, an expression of dreamy content on his face. Eight MIXIES – a particularly evil form of Nixie dedicated to D’namnas, a Chaotic entity associated with the disorder of dreams and nightmares – surrounded the boy. One stroked his hair.

A Fighter, played by D, fired his heavy crossbow, impaling one of the Mixies. The Mixies transformed into something vile; the lower parts of their faces extending into a leech-like ring of teeth and bony spikes protruding from their wrists. Ululating, they summoned two (small) GIANT CRABS from their lair in the mud walls of the bowl. Chip and Dale cut down the Mixies in pretty short order. However, Kitty, seeing a Mixie move to attach her leech-like mouth to Georghe’s neck, charged. The Mixie speared her through the eyes – while Kitty was only reduced to 0HP, A rolled a 1 on the Death and Dismemberment table. With the Giant Crabs closing, Chip and Dale decided to retreat, and splashed down the Vein as the day ended and the Mire Wood filled with shadows.

They didn’t tell Raglan Tincu, or anyone but the absent members of their party, that they had seen Georghe, or about the ’temple’ deep in the Mire Woods. Tincu rewarded Chip and Dale for returning Vitali. For some reason, as they rested, waited for the other party members to recuperate, and drank in the taverns of Gateways, Chip and Dale span a story that Hengist and Kitty had run off and abandoned the party. Whether this lie will have any repercussions remains to be seen.

Two weeks later (the following night), Chip and Dale returned to the Mire Woods with a few more swords…