Nothing New Under the Sun

In our games of D&D (or whatever it is) I had been using the long trusted method of dealing with natural 20s and 1s in combat; double damage and a 'fumble' respectively. Of course, under this system a high-level fighter has exactly the same chance of scoring a critical hit as an clumsy child, and they both stand the same chance of dropping their swords. And it is more than a bit implausible to have even high-level fighters dropping their swords once every twenty combat rounds. In the past, we've played combats with these kinds of fumbles and have had swords flying all over the shop, bowstrings snapping like elastic bands, and sling stones scattering all over the slippery dungeon floors. Funny, for sure.


So for fumbles, we've just adopted the rule of two - a natural 1 leads leaves the unlucky dungeon delver with one round -2 across the board penalty, to hit rolls, armour class, saving throws, and anything else that might pop up. So everyone over stretches themselves once every twenty combat rounds, but the more able characters are more able to cope with the effects.


As for critical hits, I've seen houserules that try to emulate the RuneQuest critical system, where higher skill=a broader window of scoring a critical on the attack roll. Most of these involve rolls a certain number over the target number being a critical success, i.e. the lower the THAC0, the better the chance of striking a critical. Those systems look too fiddly for D&D. So I took my guide from WFRP1e, which allows the d6 damage dice to 'explode', so long as a second roll against Weapon Skill is made, and decided that a natural 20 would prompt a second attack roll. In other words, a natural 20 might cause 'double damage', but only if the attacker is skilled enough to 'hit' again. Another natural 20 results in another attack roll, and so on. But the chances of a series of natural 20s are microscopically small. Sure, you might kill a dragon in one blow, but only once every century or so...

And then I sat down yesterday with my Rules Cyclopedia, my AD&D1e PHB and DMG, and my AD&D2e PHB and DMG, all to try to work out what I'd make my D&D players pay as upkeep costs. I didn't want them scrabbling for coppers in vein of our WFRP1e games - this was meant to be D&D(ish), after all - but I didn't want the game to completely ignore these things. My AD&D2e DMG is a much travelled book - it was posted the Dominican Republic to me for my birthday in the early 1990s, came back across the Atlantic to sunny Scotland, and since then has followed me around the UK - so it is no surprise that several pages are loose. One of these loose pages described the optional critical hit systems. And one of these systems was the system described above. 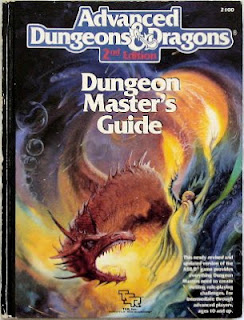 Nothing to see here. Just the story of a gamer finding that everything he thought of had been first invented over twenty years ago. It is funny feeling like one of the designers of D&D Next, eh?

p.s. Tenkar's thoughts on Attacking the Darkness certainly bear thinking about as an alternative fumble system, mind. They seem original, but who knows what rules are hidden in my gaming cupboards?